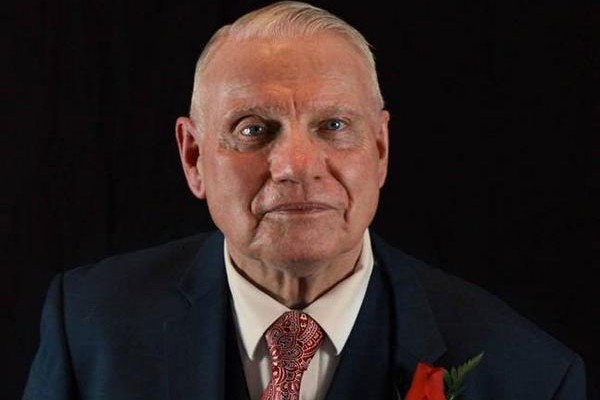 Robert V. (Sammy) Allen was born in Resaca, Georgia on October 4, 1937 to Vince Winfield and Myrtle Timms Allen. He was the youngest of three children and grew up on their family farm plowing fields and picking cotton.

As a young lad, Sammy Allen was greatly influenced by “the course of this world” and lived a very sinful life into his teen years. This sinful lifestyle continued until late 1954 when he began to experience a strong uneasiness in his heart because of his sinful condition. After several months of deep, Holy Ghost conviction, he was saved by the grace of God in the summer of 1955. Immediately after his conversion he began to tell others of their need for salvation. His burden and zeal were so evident that he was soon invited to speak as a lay preacher in Sunday School classes, cottage prayer meetings, and church services across the region.

Bro. Allen announced his calling to preach in 1961 and was called to be the pastor of both Maple Grove Baptist Church and New Prospect Baptist Church shortly thereafter. He pastored both both churches simultaneously for several months until God used him to help organize the Concord Baptist Mission in Fairmount, Georgia into Concord Baptist Church in October of 1961. God also began to open evangelistic doors during this time. So much so that by 1964 Bro. Allen had to leave his job in the carpet mill to pastor and travel in full-time evangelism. He continued to preach meetings week after week across the country and pastor Concord Baptist Church until his passing on August 2, 2020.

Bro. Allen was married on December 28, 1962, to Jimmie Lou Wilson. “Miss Jimmy” (as she is lovingly known) stood by his side as a faithful, loving, God-fearing wife in every way. God blessed their home with two sons and a daughter.

In the late 1960’s, God began to burden Bro. Allen’s heart for a Camp Meeting in the area he lived. After much prayer, Faith Baptist Camp was born, and the first meeting held under a large tent on the camp grounds in June of 1970. Faith Baptist Camp has been used of God ever since to bless many people and churches across America.

Pastor Allen was one of the most respected and Godly men of his generation. He was known as an evangelist, revivalist, camp meeting preacher, pastor, prayer warrior, and friend by all who knew him. He went home to glory on August 2, 2020.